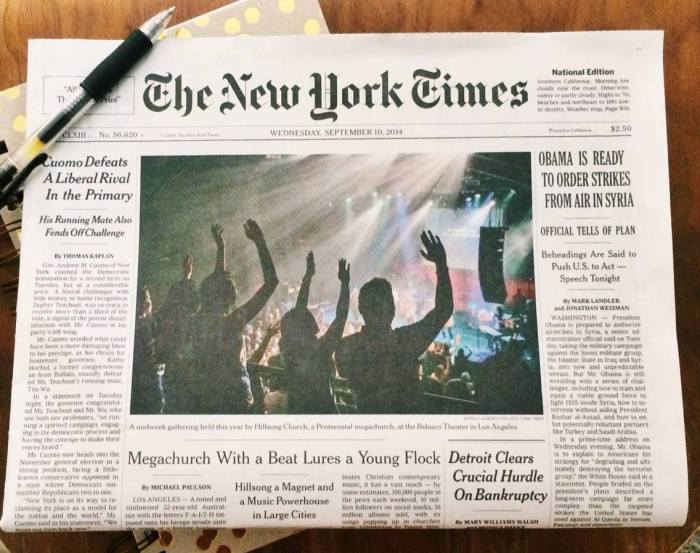 Recently, it seems that the spotlight has been on the shift and the movement taking place throughout our culture in music, films, TV, and through entertainment…Spirit filled wave of positive influence through worship, faith based films, and also increase in the Gospel being spread through the vehicles of technology. One of these shining lights is a church that I am honored to be apart of and that has blessed my life since I was 12 years old, called Hillsong Church.

Hillsong Church based out of Australia, and it is one of the vessels God is using powerfully to share the good news through television, media, publishing, music, and now even more recently, film.

The spotlight is now on the church’s worship band Hillsong United, who has toured the world leading thousands in spirit filled worship. They also have a church worship team, Hillsong Live (albums), and their new youth band, Young and Free. If you don’t know who the Hillsong United worship band is-just Youtube them. Their song “Oceans,” hit the #1 spot on the Billboard Charts on the Hot 100. (http://www.billboard.com/biz/articles/news/5893715/happening-now-hillsong-uniteds-oceans-becomes-first-christian-songs-no-1) 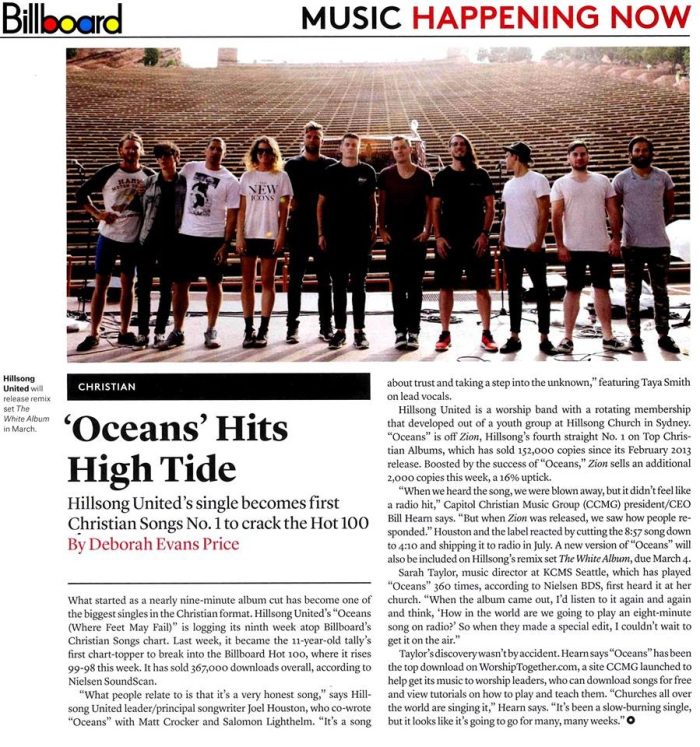 They have hit the top of the Christian/Gospel charts and even sold out Staples Center, and even booked the Hollywood Bowl. On the West Coast, they had the first conference in the states in 2013. So much has been happening the last couple years in the growth and expansion of the church in regards to fulfilling the Great Commission. (Matthew 28:16-20)

There are many people who have yet to experience God’s presence in a worship setting created in a musical atmosphere like this but when you encounter it, it can be life changing.

So life changing that it catches the attention of the secular media. Funny how God can change man’s hearts like channels of water for HIS glory and purpose. Amidst the glitz and glam of the venues that the band has led worship in, they still keep their reverence for God, giving Him all the credit, honor, and power. “It is not about them, it is all about HIM.” You will see this tagline in the featured trailer of, you guessed it, “Hillsong the Movie: LET HOPE RISE” set to be released in 2015, worldwide.

Read Pastor Brian Houston’s blog about movie, entitled, “Why would anyone want to see a movie about us?

I love how Pastor Brian keeps it real and humbly expresses his reasoning into agreeing to allow the film to go forward.

Brian states that there is much prayer and thoughts regarding the project and the main reason to do the film and motive is to spread the Gospel and to also display the purpose of the church, and to be able to point to Christ.

“This was my response when some Hollywood producers approached us late last year with a proposal. A Hillsong movie. A story about the band, Hillsong UNITED, and the humble beginnings of a little church in Australia…

The aim is to give people the world over the opportunity to experience the praise and worship that has been birthed in this House.

We aren’t naive enough to believe that it’s all going to be a ‘walk in the park’, but we have faith to believe that opening up our lives and portraying the journey with authenticity may just point people to the One we live for and long to glorify – Jesus…” (To Read more go to his blog here: http://hillsong.com/blogs/collected/2014/august/why-would-anyone-want-to-see-a-movie-about-us#.VCEP-K0RnF5)

Aside from the film, the media is caught the glimpse of what the global church is doing in New York and Los Angeles. The church of approximately 30 years has now expanded to 12 locations around the world (amazing I know), and is now based in Los Angeles, as of May 2014. The New York Times picked up on this story, and it just made front-page news September 10, 2014. The article is entitled, “Mega church With a Beat Lures a Young Flock.”

Talk about overwhelmed by what God is doing! Not only that but I saw this vision of Holy-wood, and hundreds worshipping in the broken, re-built buildings/ theatres/nightclubs. Not saying that this is the reason it has happened but to be an EYEWITNESS of God’s glory-utterly amazing. I am speechless at the Lord’s majesty and the way He unfolds His promises. God can use whatever and whomever HE chooses. Pastors Brian and Bobbie Houston, along with many faithful leaders and servants have paved the way for this church to expand and to reach so many souls.

Because of their obedience, willingness and sacrifice, many people’s lives have been impacted for God’s Kingdom-including mine. I love also, the heartbeat of the church and of the Pastor’s hearts-to always credit, and give GOD the praise. They know that they are being used for a larger purpose higher than themselves, never taking the credit, and they know truly that they could have ever imagined this would happen to their church family.

They are grateful and blessed to be used by God on this scale, and don’t undermine other churches-as we are all one body, being used for different purposes in the Kingdom of God. As 1 Corinthians 12:4-6 says,

The Pastors clearly indicate, every church matters and every person matters. Some people are called to be in foreign countries, and others in encouraging healing, prophesy, interpreting, evangelism, and so forth but we are all one in spirit for the glory of God.

This is the time where we are able to influence people with media and through technology like never before. I truly feel called to be apart of what God is doing in Hollywood-and I am honored, humbled and truly grateful I get to be apart of Hillsong LA, and also what the Lord is doing within the entertainment industry. Seeing new faith based, positive films that impact society for the better and for the Kingdom is beyond what I can imagine. (Ephesians 3:20) I know this is just the beginning and the best is yet to come!

{Please be praying for the leaders of the churches around the globe, the worship leaders, and for the production and release of the film. Pray that souls are touched and that people get saved. Pray that God sends a hedge of protection around the leaders, those behind the scenes, and those who have sown into the house of God. Pray that God will get the glory due unto Him, and that the wave of this film will spill over into every household and that people will be eager to learn about Jesus. Pray for the Madison Square Garden Conference coming this fall in October (which is already sold out), and that people come to know the Lord and Savior Jesus Christ. God bless you! }

To find out more about the church’s film: